PART 3
Understanding how the Lord used Deborah of the Old Testament, Judge & Prophetess. 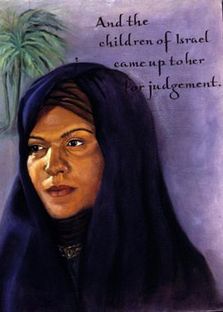 While there are many notable and history changing women mentioned in the Old Testament, I want to briefly stop at one woman by the name of Deborah. I feel like she is the perfect woman to examine in our discussion of the legitimacy of women in leadership. She enters into the record of scripture in the Book of Judges. Let me remind you this is a “post fall, pre-Jesus death and resurrection” time period. Also, let me remind you, this is scripture in the Bible!

Before we look specifically at what the scriptures say about Deborah, I want to make sure everyone understands what the Book of Judges is about and what exactly a “judge” was back then, in this context.

The Hebrew word which is used for judges (As in Judges 2:16 “Then the LORD raised up judges who saved them out of the hands of these raiders. “) is the word “shaphat” and it means, ”to judge, govern, vindicate, punish”. It also means “to act as law giver, to decide controversy, to rule, to execute judgement”. In a few sentence summary, Judges is a book that chronicles the history of Israel under each successive Judge. There was only one Judge at a time and they basically led the country in many ways, one main way being strategic military defense against any foreign invaders. God would deliver Israel from the enemy, the people would praise God, then people would forget God, enemies would begin to attack again and God would save them, they would return to God...repeat...repeat.

All of the judges were men EXCEPT ONE- Deborah!

So we can’t gloss over her. We can’t say God never uses women because clearly He does as we have example of one right here in Deborah. And this is Old Testament times! Deborah is one of my favorite women to teach about so let’s look at what the Bible tells us about her and her role in history.

Judges 4:4 says “Now Deborah, a prophet, the wife of Lappidoth, was leading Israel at that time.”

So from this introduction we learn that Deborah, first and foremost, is a woman. If it’s not clear from her name (which I bring up because sometimes there is controversy over whether a name is male or female) then it is made crystal clear from the statement that she is a wife. Next, we learn that she is a prophet (if you want to go with prophetess I have no issue with that either). The Hebrew root word used here is “nabiy” which means “speaker, spokesman, or prophet”. In Webster’s dictionary a prophet is defined as “someone who delivers messages believed to have come from God” or “one regarded by a group of followers as the final authoritative revealer of God's will” .

Continuing on, we see that Deborah was leading Israel at the time. The word for leading is actually the same word used for judging (“shaphat”) which we defined above.

From this one passage alone we can see that God put a woman in leadership over an entire nation and that woman’s leadership included: judging, governing, vindicating, punishing, law giving, ruling, and settling controversy. Deborah also was a prophet so she spoke with authority and revealed God’s will.

If we continue reading in the next verses we see a number of things that further show how God used a woman even in Old Testament times.

She held court, she settled disputes (which goes hand in hand with part of her “job description” above). She also summoned a military leader named Barak, prophesied speaking a command of the Lord to him to enter into a particular battle and the victory would be his. Barak replied saying to Deborah, “if you go with me I will go, but if you do not go with me, I won’t go”. Interesting…but that’s a story for another day.

Deborah agrees to go with him but of course, because Barak handled it this way, the ultimate victory, he is told, will go to a woman (spoiler: it’ll be Jael, another woman!)

And it does indeed all work out.

Okay, so this is what I’d like to point out in addition to what I already focused on.

Remember how Deborah was married? Yes, she was married and it wasn’t to Barak! And yet here we have an example, a positive, holy, God inspired and creative example of a woman in ministry/leadership without her husband. She went into battle with Barak, not her husband, and in keeping God’s ways the victory was still won for Israel.

Now, before anyone thinks I am writing a paper to encourage women to find men other than their husbands to enter into battle with, or before you think I’m discouraging wives from working in unity and partnership with their husbands to bring forth God’s plans, let me be clear….I’m not doing either of those. I am however emphatically pointing out a truth of scripture where a woman (In this case a married woman) in leadership functioned properly in her role and function and a man partnered with and respected her leadership and insight from God and it saved a nation and revealed God in a big way!

This is just one example of how God’s desire/heart was never to stop using women but we will find many more examples of God raising up women to lead and also further His Kingdom on the earth. When we compare Deborah’s function to the original mandate given to both male and female, we can see that Deborah was really operating in line with that original purpose and plan. Male and female side by side ruling over and subduing the enemy.

A lot of pastors these days won’t preach on Deborah. They’ll tell you about Samson or Gideon but rarely Deborah. She doesn’t seem to fit into their mold and beliefs that restrict women in leadership. I argue that you can’t make a statement about women and leadership and say it is “from God” if we have an example right here that contradicts any limitation. I would argue that you can’t ignore Deborah. You can’t try to twist her story or make it disappear. It is right there in all of our Bibles and it reflects God’s heart for women. Why aren’t little girls and boys sitting in Sunday School hearing about this remarkable woman leader? Really, why aren’t they?