ARE ALL SINS & THEIR PUNISHMENT EQUAL?

Considerations stemming from the common saying of: "All sins are equal." 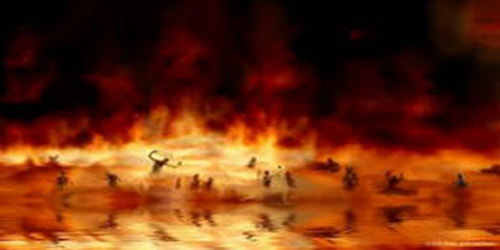 Is it true that all sins are equal?

After all, all sin is sin. In one sense, yes and in other ways, no. It only takes one unforgiven sin to keep us from heaven. We need a perfect account with God and that is only found through the redemption offered by Jesus Christ taking the penalty of our sins. However, no where in the Bible does it say that lying is equal to adultery or murder equal to idolatry.


The Bible does say that certain sins are in the same category as others. For example,

1 Samuel 15:22-23 So Samuel said: "Has the Lord as great delight in burnt offerings and sacrifices, as in obeying the voice of the Lord? Behold, to obey is better than sacrifice, and to heed than the fat of rams. For rebellion is as the sin of witchcraft, and stubbornness is as iniquity and idolatry. Because you have rejected the word of the Lord, He also has rejected you from being king."

Would the sin of telling a lie be equal or worse than committing murder?

Naturally, murder is worse than lying and the consequences or penalties of sin correlated to the severity of the sin, as seen in the Law of Moses. And not all sin was punishable by death. Atonement for sin was made both individually and corporately, with specific sacrifices according to the type of offense or sin committed.


Since Jesus came to earth, He has called us to a deeper level with God and man.

Matthew 5:27-28 "You have heard that it was said to those of old, 'You shall not commit adultery.' But I say to you that whoever looks at a woman to lust for her has already committed adultery with her in his heart.”
So why not just go ahead and commit the murder or adultery? Because the sin will have increased; one in the heart and one of the physical. Even though the one in the heart is sin, do not think that to follow on it, it will only dig one's hole deeper. This is a whole other subject for consideration!


Father God is the One who had made the rules and has written the punishment. The wages of sin is death. But all sin is not the same.


While any “unforgiven sin” will take a person to hell, will there be degrees of punishment in hell?

Definitely yes, there will be degrees of punishment in hell. Bible verses to follow showing why the answer is yes. Well, some say, “Even if there are degrees of punishment in hell, what difference would it make; because, hell is hell? Jesus spoke about it, so it must be important. While all hell is hell, there is also justice. If one person commits sins worse than another, should they not be dealt with by a holy God according to His wisdom and fairness in the punishment? If any of us do not repent and we refuse the covering that Jesus has offered by His own blood, we will reap what we have sown by our own doing, according to the Judgment of the Lord of all creation.


Please consider the following verses which show how the eternal punishment for sin varies.

Matthew 10:14-15 "And whoever will not receive you nor hear your words, when you depart from that house or city, shake off the dust from your feet. Assuredly, I say to you, it will be more tolerable for the land of Sodom and Gomorrah in the day of judgment than for that city!"

Luke 12:45-48 "But if that servant says in his heart, 'My master is delaying his coming,' and begins to beat the male and female servants, and to eat and drink and be drunk, the master of that servant will come on a day when he is not looking for him, and at an hour when he is not aware, and will cut him in two and appoint him his portion with the unbelievers. And that servant who knew his master's will, and did not prepare himself or do according to his will, shall be beaten with many stripes. But he who did not know, yet committed things deserving of stripes, shall be beaten with few."

Luke 20:45-47 Then, in the hearing of all the people, He said to His disciples, "Beware of the scribes, who desire to go around in long robes, love greetings in the marketplaces, the best seats in the synagogues, and the best places at feasts, who devour widows' houses, and for a pretense make long prayers. These will receive greater condemnation."

John 19:10-11 Then Pilate said to Him, "Are You not speaking to me? Do You not know that I have power to crucify You, and power to release You?" Jesus answered, "You could have no power at all against Me unless it had been given you from above. Therefore the one who delivered Me to you has the greater sin."

Hebrews 10:26-29 For if we sin willfully after we have received the knowledge of the truth, there no longer remains a sacrifice for sins, but a certain fearful expectation of judgment, and fiery indignation which will devour the adversaries. Anyone who has rejected Moses' law dies without mercy on the testimony of two or three witnesses. Of how much worse punishment, do you suppose, will he be thought worthy who has trampled the Son of God underfoot, counted the blood of the covenant by which he was sanctified a common thing, and insulted the Spirit of grace?

Revelation 20:12-13 And I saw the dead, small and great, standing before God, and books were opened. And another book was opened, which is the Book of Life. And the dead were judged according to their works, by the things which were written in the books. The sea gave up the dead who were in it, and Death and Hades delivered up the dead who were in them. And they were judged, each one according to his works.
In conclusion.

We can see clearly that sin is simple and yet complicated. The Lord in His wisdom has made the way for deliverance not only from the bondage of sin, but from its punishment. All sin separates us from God if not repented from and while hell is the punishment for all sin, the level of hell will be according to one's works as determined by God. Jesus and the writers of the Scripture have made it fundamentally clear.
In closing, if you should happen here and find yourself in need of deliverance from sin and its consequences, please see the message:

Or if you once were born again and right with God but strayed, see the message:

NEXT ARTICLE
Copyright © 2014 E. Cockrell May be used for personal study or instruction but shall not be copied and/or distributed in whole or part without permission or for financial profit.

JUDGMENT DAY
Will there really be a “Judgment Day” where "everyone" will stand before God and give an account of their lives? Is the Great White Throne of Judgment for the Lost and Believers alike?

HEAVENLY REWARDS
Are all Christians & their good deeds rewarded the same?
PEARL GATES
Considering why God might have chosen "pearls" for the gates of New Jerusalem.

MANY ARE CALLED, BUT FEW ARE CHOSEN
Understanding what this verse in Matthew really means & who qualifies.
ONCE SAVED, ALWAYS SAVED?
A fresh biblical approach to this age-old argument.
ONCE SAVED, ALWAYS SAVED - EXPOSING THE IMPOSSIBILITY
How do we explain these many Bible verses if "once saved-always saved" is true?
RETURN TO THE LORD
Were you once right with God and somehow slipped away?
SALVATION
If you died today, do you know where you would spend eternity?
​TRUE REDEMPTION
Jesus Christ is the only true redeemer and no one can come to God except through Him.
WORTHY
Understanding the seriousness of Matthew 10:38, "And he who does not take his cross and follow after Me is not worthy of Me."


Copyright © 2014 E. Cockrell May be used for personal study or instruction but shall not be copied and/or distributed in whole or part without permission or for financial profit.