IS THE WORD "RAPTURE" IN THE BIBLE? 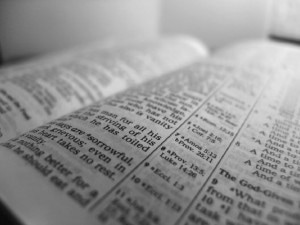 Our “gathering up” to the Lord is commonly called the rapture. But is the word “rapture” really in the Bible? Yes and no. The specific word “rapture” is not in most English translations of the Bible but it is in some of the languages of the Bible (including Italian and Romanian). The word “rapture” is derived from the Latin Vulgate Bible which was translated from the Greek word “harpázō,” meaning to “openly, forcefully take up” or “openly and suddenly catch away.” The English word “harpoon” even has some of its root basis from this word.

Let us consider the Latin Vulgate Bible and how “harpázō” has come to mean the word "rapture" that we use today.

The Latin Vulgate Bible is a version of the Bible that has been in use for over sixteen hundred years, which is the longest use of all versions of the Bible and over twelve hundred years longer than the King James Version. The LVB was translated from early manuscripts by a man named, Eusebius Sophronius Hieronymus, who has since become known as St. Jerome. He translated the various forms and tenses of the original Greek word “harpázō” into various forms and tenses of the Latin word “rapio.” All the words, no matter what language, mean the same thing, to be “openly and suddenly caught away, plucked up, snatched or seized.”

The accuracy of the original meaning is what matters the most.

Since rapio’s various forms and tenses are truly accurate translations of the tenses of the Greek word harpázō and its forms and tenses, then it really does not matter whether someone says “caught away” or “caught up” or if they use the word “raptured,” “snatched away,” “taken up,” “plucked out” or “taken by force,” etc., because they all mean the same thing; a very sudden, open, forceful and decisive seizure of something or in our case, the church of Jesus Christ being caught up to the Lord.

Let's take a good look at one of our biblical concordances.

Strong’s Greek Concordance #726 harpázō – properly, seize by force; snatch up, suddenly and decisively – like someone seizing bounty (spoil, a prize); to take by an open display of force (i.e. not covertly or secretly).

Notice in the preceding definition, “harpázō” means to suddenly and decisively, openly seize” by force, not covertly or secretly. This is another reason to consider a “visible rapture" and not a “secret or invisible rapture."

"Harpázō," in one tense or another, has been used in the Bible at least thirteen times. Here are five strong instances.


In our concept of a mid tribulation and pre-God's wrath rapture, this word "harpázō" has an even more powerful meaning.

The Lord says that we will go through the most intense tribulation in all the world's history (Matthew 24:21-22) and that He will shorten the time for the sake of the elect. We sincerely believe that the 5th seal is when the Two Witnesses will be killed and the Antichrist will start vigorously asserting his agenda. The 5th seal represents the martyrdom of believers but thankfully, the 6th and 7th seals will then be coming fast (Revelation 6:12-17, 8:1).

When the rapture finally does happen, it will have been greatly longed for, as one can realize from these verses:


And a little further down in,


In regard to the same subject in Luke, Jesus also says,

Why include these thoughts here?

The rapture is so much more than just the "catching away" of the church. It will also be its sudden and open deliverance from the wicked. When the evil one succeeds in killing the Two Witnesses, he will start turning on Christians and Jews like never before. Christians will have been being persecuted before, but the hatred of true Christians will become unleashed, when they refuse the commands of the evil ones. At this point, the evil one's false prophet will order an image to be made in tribute to the Antichrist and the false prophet will breathe life into that image. Everyone alive will be ordered to worship the image or be killed. Also, the evil one will think he is completely free to set himself up like God in the temple of Jerusalem. And since he will no longer need the one world global government anymore that he will have risen to power through, he will then "invoke his own system by demanding all take his mark, without which no one will be able to buy or sell. There will be 144,000 pure Jews who will have kept the Law (Torah) and who will see the Light, but too late in time for the rapture, and God will take the time to have His Jewish remnant sealed to protect them from the wrath of the evil one, and from the 7 trumpets and 7 bowls of God's wrath that will follow after the time of the rapture.

Once again, for Christians, the rapture will truly be a time of deliverance as well as for the 144,000 Jews being sealed for their protection. To the believers who have gone on before us and those alive, it will be a time of receiving our incorruptible bodies. Sometimes people forget or some perhaps do not realize, but in Matthew 25:31-46, we see it is not just the harvest of the sheep but also of the goats. It is the beginning of their judgment. To the lost, it will be the beginning of God's judgment and wrath. And to the devil, Antichrist and false prophet, their reign is all but over. They will be allowed to continue in a certain measure until Armageddon, whereupon the devil will be bound for a thousand years and the Antichrist and false prophet will be captured and thrown into the lake of fire.

In closing, here are the other occurrences in the Bible, where the original Greek word “harpázō” has been used.


NEXT ARTICLE
Copyright © 2014 E. Cockrell. May be used for personal study or instruction but shall not be copied and/or distributed in whole or part without permission or for financial profit.

WHAT IS THE RAPTURE?
How we know there will be a rapture and more.
RAPTURE VIEWS﻿﻿
Article showing various end time and rapture views including millennial views with definitions to help in having a deeper understanding.
THE MYSTERY OF THE 70 WEEKS OF YEARS
From this prophecy in Daniel, "the last week of years" are determined, which are commonly known as "the 7 years of tribulation" and this article includes a chart to help in understanding.
THE TRIBULATION AND THE WRATH OF GOD
Understanding that mid tribulation rapture is pre-God's wrath. Taking a closer look at what "wrath and tribulation" really mean and what really happens during the last 7 years of this age.
﻿﻿"TRIBULATION AND WRATH" - BIBLICAL DEFINITIONS AND USAGE
A word study, taking a deeper look at original context.
THE BIBLICAL MINDSET FOR LIVING IN THE LAST DAYS
The best biblical mindset for living in the last days, as shown in 1 & 2 Thessalonians.