THE INSCRIPTION AT THE CROSS

Taking a closer look at the sign above Jesus while on the cross. 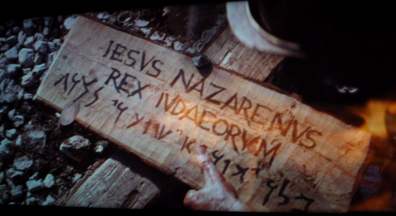 Oftentimes, we take history for granted. We read it or hear it and just receive it. If we will “hear” with more than just our ears, there are lessons to be learned, important factors to comprehend and sometimes much discovery to be made. If we grasp what we can correctly, we can file it properly in our minds and build upon it as we learn more. Such is the case with “the inscription” above Jesus on the Cross. It was so much more than just an inscription.

Let's consider these verses in the Gospel of John.


To many, it might seem like just a bit of history recorded in the gospel of John and that the chief priests did not like it. But this inscription, written by Pilate and nailed to the cross, caused a great deal of stress and anxiety for the chief priests, Scribes and Pharisees. Let's see if we can understand their dilemma and in the process, perhaps see an even bigger picture.

First, let us realize why the Romans had a sign in the first place.


It was a custom by the Romans, to hang what was called a “titulus” around a criminal's neck or have it carried before him, on the way to his execution. A titulus was a wooden tablet covered with gypsum and and then written on it in black letters, the charge by which the prisoner was condemned. It then would be affixed to the upper portion of the cross, above the criminal's head for all to see and to also be taken as a warning to obey the Roman law and not to do the same.

Next, let us seek to understand some of the customs of the Jews regarding “the Lamb” of Passover.

The lambs were sacrificed on Nisan 14 according to Scripture (Exodus 12:1-10). And also according to Scripture, four days prior to the sacrifice, the lamb had to be set aside. This lamb had to be without spot or blemish. In keeping the lamb for the four days, it showed its quality and health. To use a sickly one or injured one was a sin and insult to God. They were to offer their best and it certainly had to qualify. (Note: it was not the person that needed to make the sacrifice that had to qualify, but the sacrifice that was to be perfect; we are not perfect, but Jesus our savior was and is. The fact that we are not perfect is why in fact we need a savior).

When Jewish families arrived in Jerusalem with their lambs for the Passover, they would either bring with them, or purchase, a name tag for their lambs. This name tag would have the family name written on it; and in this fashion, their particular lamb could be known even when mixed in with many other Passover lambs. They would tie or hang it around the neck of their lamb. Each father desired that God would know their family was observing the Passover, and that the lamb that bore their family name was being sacrificed for them.

It is utterly amazing how all the aspects of Passover pointed directly to Jesus as the Passover Lamb for the world, long before He ever came. What is the deeper meaning of the titulus and the name tag in regard to the bigger picture?

Part of the answer is found in the Gospel of John, but we must understand the protocols of the day, to piece the whole picture together.

In John 19:19-20 it tells how Pilate wrote the inscription and had it placed on the cross above the head of Jesus. The inscription was translated into most of our English Bibles as "Jesus the Nazarene (or of Nazareth), the King of the Jews." The Bible records that it was written in three languages: Hebrew, Greek, and Latin. In this fashion, the Romans would read it in their native tongue of Latin, the Jews would read it in Hebrew, and anyone else could read it in the common language of that day which was Greek.

There was a literary custom of the scribes of those days, and it was to take the first letters of the words in a phrase and put them together to see if there would be a hidden meaning from the arrangement of these letters.

This custom dates back at least to the time of the Babylonian captivity of the Jewish nation. Today this is commonly called acrostics. The old Testament Scriptures have many such acrostics and they were accustomed to it.

Fast forward to the Roman Catholic Church and the use of the letters: INRI

The Roman Catholic Church used this ancient custom by placing four letters on their crucifixes which are "INRI." These are the first letters of the four words of the inscription on the cross as they appeared in Latin.

They had the right idea according to Jewish religious customs, but in using the Latin language, it does not really reveal the bigger picture or make Jesus more real to the Jews as the Passover Lamb. However, when shown in Hebrew, as we will see shortly, it is an incredible testimony to all the Jews then and even still unto this day.

When considering the inscription in Hebrew, we can see what so deeply offended the chief priests and scribes.

When the chief priests and scribes saw the inscription on the cross in Hebrew, they naturally looked at the first letters to find out if there were any hidden meaning in their language. And when they did, their blood pressure surely rose as they were appalled at the sight of what they read.

And not only did they see it, but many did. John recorded, “Then many of the Jews read this title, for the place where Jesus was crucified was near the city” John 19:20.

Let us see, just what the Jews saw when looking at it.

In Hebrew, the words as from above (which read from right to left) are:

The first four letters of the words in Hebrew are:

YHVH, the name of God in Hebrew is called a tetragrammaton (though the word “tetragrammaton” is a Greek word meaning “4 letter word”).

The tetragrammaton is the four-letter name of God, “YHVH” in the English rendering. The older form “JHVH” is where we get the name of the Lord: JEHOVAH. This name is usually translated in English as "the Lord."

All this goes back to the Jewish practice of never pronouncing the name as it is written but as Adonai, "the Lord." To the Jew, it was the unspeakable, holy Name of God!

In printed texts, the vowels of this word are placed under the letters of the tetragrammaton. The original pronunciation of the tetragrammaton has been lost, because of the strong Jewish disapproval of pronouncing the name. The pronunciation Jehovah, Yahveh or Yahweh are used by many but there is no certainty of the correct pronunciation according to the Jews in this matter. Some biblical scholars prefer to render it simply as YHWH or JHVH without the vowels. This name occurs over 6,800 times in the present text of the Hebrew Bible.

The offense to the Jewish leaders was just too much.

When Pontius Pilate had the inscription put there, He unknowingly and wonderfully had it put on that titulus, the acrostic for “God” - "JHVH or YHWH" - for all the Jews to see.

Our Lord, used a Roman ruler, to put the holy name of God on the cross to show that Jesus Christ was His chosen Lamb!

Jesus Christ was marked for all who came for the Passover to see that He was the final sacrifice hanging upon that tree. In fact, while God's own Son, the Lamb of God, was being executed, the priests at the Temple were preparing for the ritual of offering thousands of lambs for the people. The very lambs that were a type and shadow of the Lamb of God Himself.

When the religious leaders read the inscription, they came to Pilate and demanded for him to change it. They wanted it changed to say: "He said, He was the King of the Jews." And in so doing the name of God would not be found on the cross. As they had Jesus crucified for alleged “sin of blasphemy” - they had said that Jesus had made Himself equal with God. They tried to convince Pilate that to leave the inscription as it was put, was to tell everyone that this man was God - which was the very reason for His crucifixion."

Pilate had a limit.

Pilate had gone along with all their demands, despite the fact that Pilate had said Jesus was innocent – and that he had found no fault in Him. But on the inscription matter, Pilate "drew the line" at their demands. It was the one time during the whole trial and execution where Pilate stood his ground. His reply was, "What I have written, I have written" (John 19:22).

With this understanding, we can see another dimension to the greatest sacrifice of love of all time.

While the Jews were bringing "their Passover lambs" to the Temple with "their name tags" and were saying, "God, see our name; this lamb is for our family," the Lord had “His Name” put on “His Lamb” for the whole world to see.

As the Passover lambs were being taken to the Temple and their blood was flowing, on a hill called Golgotha, Jesus Christ, the Son of God's sinless blood was flowing for our redemption; and above His head for all to see, was JHVH, His Father's Name.