CONSIDERING THE PARABLE OF THE SOWER AND THE SEED 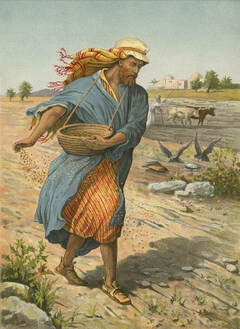 There are many teachings about the parable of the sower and the seed. This article considers not only the standard teaching but takes a closer look at the revelation of the parable by the Lord, that He gave to His disciples.

First, the parable as given in the three sections of Scripture as it is written. In order to see the full picture on subject or teaching, it helps to consider all Scripture involved. Even if you have read these verses before, or perhaps even many times, we encourage you to read them afresh for this study.


In all three testimonies, the Lord said, “He who has ears to hear, let him hear!" The Lord was inviting (and Luke even used the term “cried” which in this case means strongly urged or deeply from his heart) "all" who "had the ability to “hear” - to "use that ability" to “hear and understand” whatever "we are able.” Jesus said it that day, it His offer is still open: If anyone is able hear the Word of the Lord, hear!

Each writer (Matthew, Mark and Luke), told what happened that day from their perspective, even if it was only related to them as we know Luke was not an early disciple and most likely was not there. And when we consider all three together, we get a much clearer understanding of what they saw and heard. So when we consider all three, we can see how it started that day.

We can see that Jesus left a house He was staying at and “large numbers of people” had come from “all over the place” to hear Him and that the Lord “got into a boat and sat in it on the sea; and the whole multitude was on the land facing the sea.” Perhaps the people were even uphill on the land, looking down toward the sea, as much of the land surrounding the Sea of Galilee is situated that way.

It seems that some teachers or preachers, only tell "this parable" from one of the Gospels above and expound on it from there. But there is so much more we can glean in considering all three and also later when Jesus relates the deeper meaning to the disciples.

Whenever the Lord, or an angel that God sent, gave an interpretation on a matter, it would be sad to miss it. Both Daniel and John had amazing experiences and were dumbfounded by them. Praise God, for their sake and ours, much revelation was given for a better understanding. As it is written in the following verses, the Lord spoke to the people in parables but He explained all things to the disciples.


We have much ground to cover, but for now let us see a compilation chart of the verses so far. 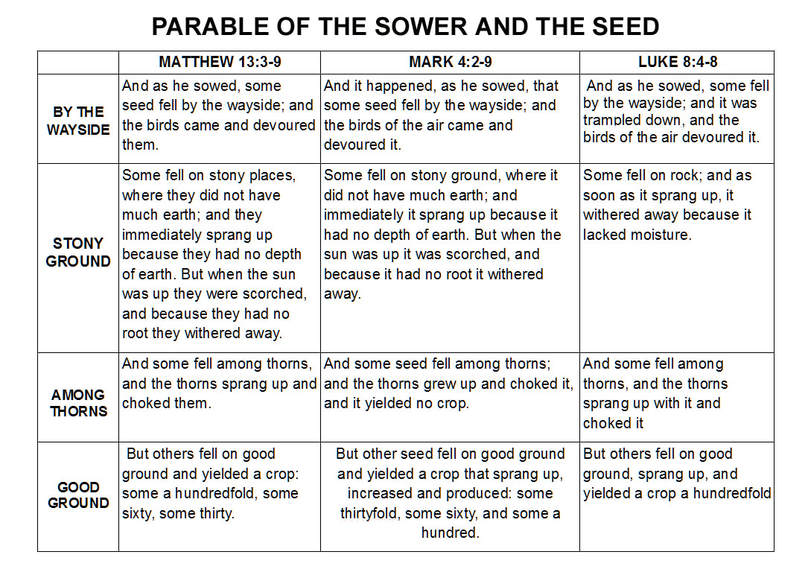 If we take these verses at surface value we can deduce that:


Now, let’s look at the verses where Jesus, explained the meaning of it to His disciples.

Here is a composition chart of the revelation Jesus gave on the matter from all three sections of Scripture. 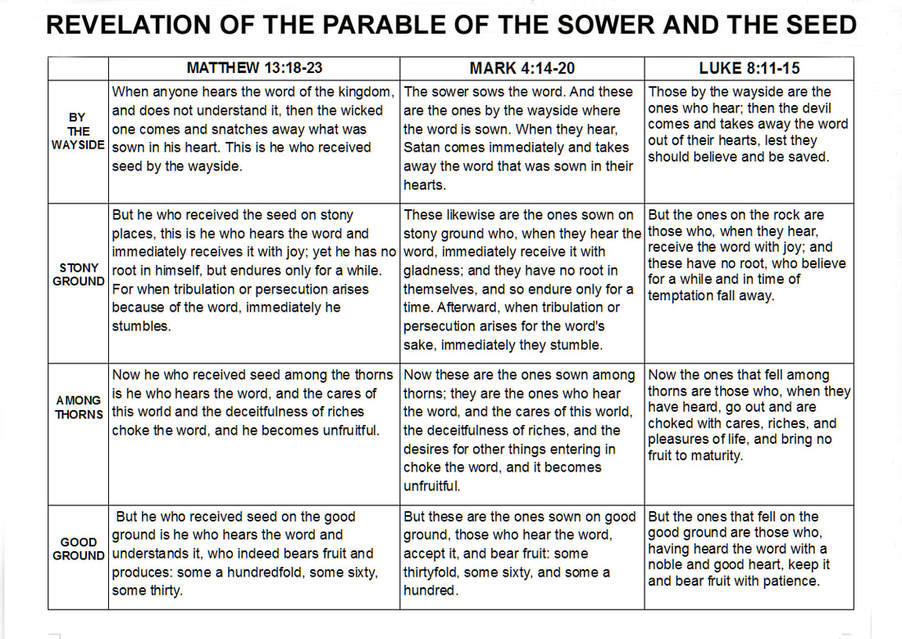 First let’s look again without Jesus’ revelation on the matter.


Now, let’s consider all the sections of Scripture together, where Jesus gave the revelation.


Let’s go back and consider Luke 8:12, “Those by the wayside are the ones who hear; then the devil comes and takes away the word out of their hearts, lest they should believe and be saved.”

More is recorded that Jesus said in his teaching that day, than what we have looked at so far. Why did Jesus say, “lest they should believe and be saved”? Let's look at the other verses.


In this situation that Jesus is referring to, the seeds of the Word of God, can only help those who have the eyes to see and the hearts to hear. In order to be the fruitful seed on good ground, there is a requirement. One has to be able to hear, understand, accept and keep the Word of God and only then can one truly "see with their eyes and hear with their ears," so they can "understand with their hearts and turn, so that I should heal them.” or  "have their sins forgiven.”

With this understanding, we can understand even more the following verse:


The soil where the seed goes is our hearts. And the condition of the heart determines everything about us. We have to want good more than evil to do it. We have to be willing at all costs, to make it to seed number 4!


Our ability to hear the Lord is directly related to the condition of our hearts.

The Lord said that those people had hearts that had grown dull resulting in deaf ears and closed eyes to what God would send to heal them. He said the disciples were able to hear. The disciples had chosen to follow Jesus 100%. And even to them he said to be careful with what they did with what they heard... because when one utilizes well what they hear from God, they enable God to give them more. But those who hear and don’t do well with it, even what they have, they will have taken from them.

As we go through life, we can easily see some on both ends, who are extremes. Some completely deaf to God's voice and godly reasoning and others who hear God extremely well and have excellent godly reasoning.  It would seem that most of us are somewhere in between. It is up to us by how willing our heart is to hear and cooperate with the Lord. This is a serious matter.

This is why one can share the Gospel or biblical lessons with some people, and if they do not have “the ear to hear” (the ability due to the condition of their heart) it cannot be received. Only the Holy Spirit knows where each person is at, so it is most important for us to heed His voice on what and when to share however He directs.

The Lord had more to teach us when giving the parable of the sower and the seed. He continued and we have this Scripture also.


And the revelation by the Lord:


Notice who owns the field! Praise the Lord, "everything is His," including the field. Unlike the parable of the sower and the seed, this seed in this parable is not the "word," but is the “sons of the kingdom” and the devil has his tares, “the sons of the wicked one.” There will be harvests also. One harvest for of those who are offensive and practice evil whose final demise will be being burned in the lake of fire where there will be a wailing and gnashing of teeth. And 'a good harvest' of the wheat, for those who chose Christ, stayed true and will have a bright and glorious future in the kingdom of their Father.

And again, the Lord who is calling out to all who have a heart to hear, “He who has ears to hear, let him hear!”

OTHER ARTICLES RELATED TO THE WORD OF GOD TOPIC


ARTICLES IN THE MISCELLANEOUS CATEGORY