THE MYSTERY OF THE 70 WEEKS OF YEARS 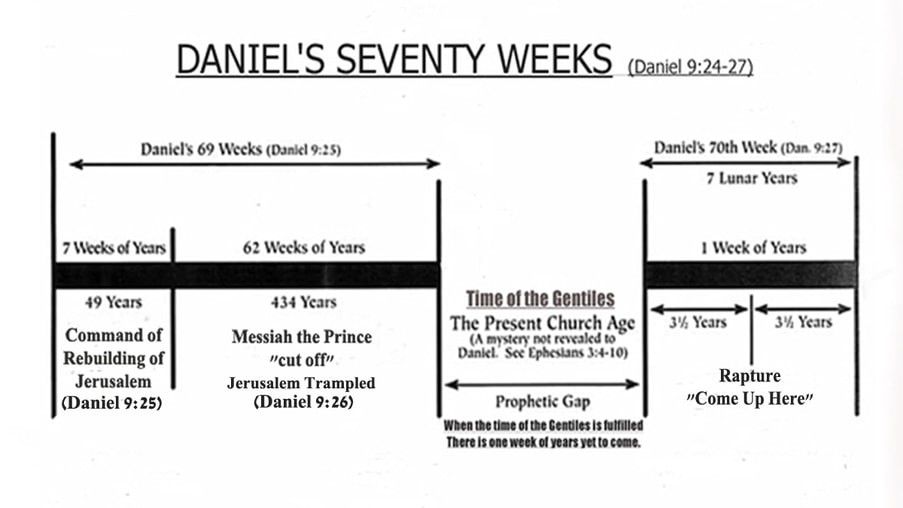 Whether one holds the pre, mid or post tribulation rapture viewpoint, almost all agree on one thing: there are "seven years set aside by God" for prophetic events.  These "last seven years of this age" are commonly called "the tribulation" or "seven years of tribulation." This concept is derived from a prophecy in the book of Daniel. The angel Gabriel came to Daniel and gave him the prophecy.

First, the verses from which the prophecy comes.

﻿
Understanding of the prophecy.

The prophetic clock went on “pause" and it became "the time of the Gentiles,” which has also been called "the church age." ***


But seventy weeks (of years) are determined! What about the 1 week of years left, the last 7 years?

PART 2. There is one last prophetic week left: When "the prophetic clock starts ticking again" and the time of the Gentiles is fulfilled (the church age) and the last week will happen. A covenant/treaty will be made for one week of years (7 years) which the evil one will confirm and break mid-week (3 1/2 years into it) (He shall bring an end to sacrifice and offering - followed with setting up the abomination of desolation)  according to Daniel 9:27,11:31 and also referenced by the Lord in Matthew 24:15/Mark 13:14. Much more will be shared on this later.

At the conclusion of these 70 weeks, it will virtually be: "the end of this current age." After the Battle of Armageddon, Satan will be bound for a thousand years and it will be a whole new era. Jesus will revive this earth and set up a millennial kingdom. After the completion of the thousand years, the devil will be loosed for a short season of testing; ending with the last battle between the devil and God. After which will come the Great White Throne of Judgment and the end of this earth and universe (which in itself is an end of an age also). There will be a new heavens and a new earth and sin will be no more! The glory of the Lord will be the light of it, as there will be no more need for a sun.﻿

NEXT ARTICLE
Copyright © 2014 E. Cockrell. May be used for personal study or instruction but shall not be copied and/or distributed in whole or part without permission or for financial profit.

WHAT IS THE RAPTURE?
How we know there will be a rapture and more.
IS THE WORD "RAPTURE" IN THE BIBLE?
Understanding  "harpázō" - the word from which we get the term "rapture" that we use today.
RAPTURE VIEWS﻿﻿
Article showing various end time and rapture views including millennial views with definitions to help in having a deeper understanding.
THE TRIBULATION AND THE WRATH OF GOD
Understanding that mid tribulation rapture is pre-God's wrath. Taking a closer look at what "wrath and tribulation" really mean and what really happens during the last 7 years of this age.
﻿﻿"TRIBULATION AND WRATH" - BIBLICAL DEFINITIONS AND USAGE
A word study, taking a deeper look at original context.
THE BIBLICAL MINDSET FOR LIVING IN THE LAST DAYS
The best biblical mindset for living in the last days, as shown in 1 & 2 Thessalonians.