HELL IS REAL AND LITERALLY BURNS AS SHOWN IN THE BIBLE 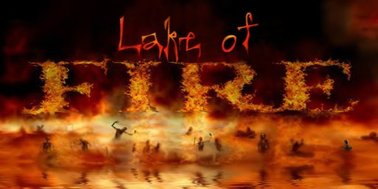 There are many people today, even in the church, that claim hell is not real; and when referenced, that it is only figurative or allegorical terminology. This is not true. Hell is not only real, it is a place that literally burns.


They shall be tormented with fire and brimstone and the smoke their torment ascends forever. This is literal and eternal.


This shows that there is a lake of fire, a burning lake of fire and brimstone. The original Greek word used for “fire” here, is “pyr” and its definition is “fire, lightning, fiery. The original word for “brimstone” is “theion” meaning smoky, burning rocks; sulphurous, named for the sulphur-smell left by lightning.


While part of what the Lord said is “allegorical” in that “the one who is cast out like a branch” - what happens to the branch is literal. All the people (who refused God & the pardon of Jesus) are literally gathered, thrown in the fire and burned. And it it not just “a” fire, but “the” fire.


The end of the Age is real. The angels are real. The separating will be real and furnace of fire is real. Nothing here is imaginary.


Notice coals, fire, brimstone and a burning wind too. Anyone who has ever experienced fire in the open, knows it has its own wind from its burning. Webster's dictionary defines “fire wind” as “the wind caused by a fire storm.” All throughout the Bible we are warned.


Added to the equation now are deep pits. And deep pits of burning fire.


In conclusion, hell is real. Whether it is referred to as deep pits, lake of fire, the fire or any of the many other ways it is referred to in the Bible. It is the place of punishment for those who refuse God and His pardon for their sins. Jesus made the way for us to be saved, but it is up to us to repent and accept His offer and stay in right standing with God. After becoming Christians, we leave our old sinful ways behind and when we sin, we repent and do our best to please the Lord in all our ways. It is up to us to heed the warnings about the cost of disobedience and sin to God. The punishment for disobedience is real. Jesus gave His heart and His life, so that none of us should ever have to go there; but the choice is up to us.

If you should happen here and find yourself in need of deliverance from sin and its consequences, please see the message:

Or if you once were born again and right with God but strayed, see the message:

OTHER ARTICLES ABOUT HEAVEN AND HELL

ARE ALL SINS & THEIR PUNISHMENT EQUAL?
The wages of sin is death. But all sins are equal? Eternal consideration on the matter of sin.
HEAVEN - BIBLE VERSES
Bible verses about what heaven is like, the throne of God, the redeemed and so much more.
HEAVENLY REWARDS
Are all Christians & their good deeds rewarded the same?
HELL - BIBLE VERSES
Excerpts from Scripture about hell.
JUDGMENT DAY
Will there really be a “Judgment Day” where "everyone" will stand before God and give an account of their lives? Is the Great White Throne of Judgment for the Lost and Believers alike?
LAZARUS AND THE UNNAMED RICH MAN
This message takes a deeper look into this teaching of the Lord, that many find to be controversial.
PEARL GATES
Considering why God might have chosen "pearls" for the gates of New Jerusalem.
WHAT HAPPENS TO US WHEN WE DIE?
A biblical answer to this universal question of where do we go when we die.