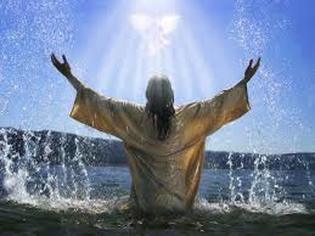 Matthew 28:18-20 And Jesus came and spoke to them, saying, “All authority has been given to Me in heaven and on earth. Go therefore and make disciples of all the nations, baptizing them in the name of the Father and of the Son and of the Holy Spirit, teaching them to observe all things that I have commanded you; and lo, I am with you always, even to the end of the age.” Amen.

Mark 1:4-5 John came baptizing in the wilderness and preaching a baptism of repentance for the remission of sins. Then all the land of Judea, and those from Jerusalem, went out to him and were all baptized by him in the Jordan River, confessing their sins.

Mark 16:15-16 And He said to them, “Go into all the world and preach the gospel to every creature. He who believes and is baptized will be saved; but he who does not believe will be condemned.”

Mark 1:9 It came to pass in those days that Jesus came from Nazareth of Galilee, and was baptized by John in the Jordan.

Luke 3:21 When all the people were baptized, it came to pass that Jesus also was baptized; and while He prayed, the heaven was opened.

John 3:22 After these things Jesus and His disciples came into the land of Judea, and there He remained with them and baptized.

John 4:1-2 Therefore, when the Lord knew that the Pharisees had heard that Jesus made and baptized more disciples than John (though Jesus Himself did not baptize, but His disciples)...

Acts 2:35-38 Then Peter said to them, “Repent, and let every one of you be baptized in the name of Jesus Christ for the remission of sins; and you shall receive the gift of the Holy Spirit."

Acts 2:41 Then those who gladly received his word were baptized; and that day about three thousand souls were added to them...

Acts 8:35-38 Then Philip opened his mouth, and beginning at this Scripture, preached Jesus to him. Now as they went down the road, they came to some water. And the eunuch said, “See, here is water. What hinders me from being baptized?” Then Philip said, “If you believe with all your heart, you may.” And he answered and said, “I believe that Jesus Christ is the Son of God.” So he commanded the chariot to stand still. And both Philip and the eunuch went down into the water, and he baptized him.

Acts 10:42-48 "He commanded us to preach to the people and to testify that he is the one whom God appointed as judge of the living and the dead. All the prophets testify about Him that everyone who believes in Him receives forgiveness of sins through his name." While Peter was still speaking these words, the Holy Spirit came on all who heard the message. The circumcised believers who had come with Peter were astonished that the gift of the Holy Spirit had been poured out even on Gentiles. For they heard them speaking in tongues and praising God. Then Peter said, "Surely no one can stand in the way of their being baptized with water. They have received the Holy Spirit just as we have." So he ordered that they be baptized in the name of Jesus Christ. Then they asked Peter to stay with them for a few days.

Acts 16:13-15 On the Sabbath we went outside the city gate to the river, where we expected to find a place of prayer. We sat down and began to speak to the women who had gathered there. One of those listening was a woman from the city of Thyatira named Lydia, a dealer in purple cloth. She was a worshiper of God. The Lord opened her heart to respond to Paul’s message. When she and the members of her household were baptized, she invited us to her home. ‘If you consider me a believer in the Lord,’ she said, ‘come and stay at my house.’ And she persuaded us.

Acts 16:33 At that hour of the night the jailer took them and washed their wounds; then immediately he and all his household were baptized.

Acts 18:8 Crispus, the synagogue leader, and his entire household believed in the Lord; and many of the Corinthians who heard Paul believed and were baptized.

Acts 19:4-6 Paul said, ‘John’s baptism was a baptism of repentance. He told the people to believe in the one coming after him, that is, in Jesus.’ On hearing this, they were baptized in the name of the Lord Jesus. When Paul placed his hands on them, the Holy Spirit came on them, and they spoke in tongues and prophesied.

Acts 22:14-16 Then he (Ananias) said: “The God of our ancestors has chosen you to know his will and to see the Righteous One and to hear words from his mouth. You will be his witness to all people of what you have seen and heard. And now what are you waiting for? Get up, be baptized and wash your sins away, calling on his name.”

Romans 6:3-12 Or do you not know that as many of us as were baptized into Christ Jesus were baptized into His death? Therefore we were buried with Him through baptism into death, that just as Christ was raised from the dead by the glory of the Father, even so we also should walk in newness of life. For if we have been united together in the likeness of His death, certainly we also shall be in the likeness of His resurrection, knowing this, that our old man was crucified with Him, that the body of sin might be done away with, that we should no longer be slaves of sin. For he who has died has been freed from sin. Now if we died with Christ, we believe that we shall also live with Him, knowing that Christ, having been raised from the dead, dies no more. Death no longer has dominion over Him. For the death that He died, He died to sin once for all; but the life that He lives, He lives to God. Likewise you also, reckon yourselves to be dead indeed to sin, but alive to God in Christ Jesus our Lord. Therefore do not let sin reign in your mortal body, that you should obey it in its lusts.

1 Corinthians 10:1-2 Moreover, brethren, I do not want you to be unaware that all our fathers were under the cloud, all passed through the sea, all were baptized into Moses in the cloud and in the sea...

1 Corinthians 12:13 For by one Spirit we were all baptized into one body—whether Jews or Greeks, whether slaves or free—and have all been made to drink into one Spirit.

Galatians 3:26-29 So in Christ Jesus you are all children of God through faith, for all of you who were baptized into Christ have clothed yourselves with Christ. There is neither Jew nor Gentile, neither slave nor free, nor is there male and female, for you are all one in Christ Jesus. If you belong to Christ, then you are Abraham’s seed, and heirs according to the promise.

Ephesians 1:13-14 In Him you also trusted, after you heard the word of truth, the gospel of your salvation; in whom also, having believed, you were sealed with the Holy Spirit of promise, who is the guarantee of our inheritance until the redemption of the purchased possession, to the praise of His glory.

Ephesians 4:4-6 There is one body and one Spirit, just as you were called in one hope of your calling; one Lord, one faith, one baptism; one God and Father of all, who is above all, and through all, and in you all.

Colossians 2:10-14 ... and in Christ you have been brought to fullness. He is the head over every power and authority. In Him you were also circumcised with a circumcision not performed by human hands. Your whole self ruled by the flesh was put off when you were circumcised by Christ, having been buried with Him in baptism, in which you were also raised with Him through your faith in the working of God, who raised Him from the dead. When you were dead in your sins and in the uncircumcision of your flesh, God made you alive with Christ. He forgave us all our sins, having cancelled the charge of our legal indebtedness, which stood against us and condemned us; he has taken it away, nailing it to the cross.

1 Peter 3:20b-21 ... when once the Divine longsuffering waited in the days of Noah, while the ark was being prepared, in which a few, that is, eight souls, were saved through water. There is also an antitype which now saves us--baptism (not the removal of the filth of the flesh, but the answer of a good conscience toward God), through the resurrection of Jesus Christ...

NEXT ARTICLE
Copyright © 2017 Carmen Puscas May be used for personal study or instruction but shall not be copied and/or distributed in whole or part without permission or for financial profit.

BAPTISM BY WATER
Understanding the importance and necessity of water baptism.

Copyright © 2017 Carmen Puscas May be used for personal study or instruction but shall not be copied and/or distributed in whole or part without permission or for financial profit.