RECEIVING THE KINGDOM OF GOD AS A LITTLE CHILD 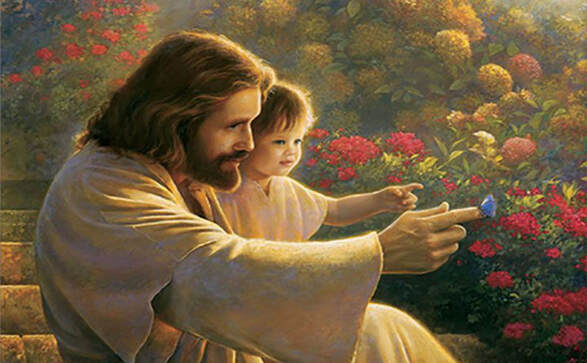 “Assuredly, I say to you, whoever does not receive the kingdom of God as a little child will by no means enter it."
Luke 18:17

“Whoever does not receive the kingdom of God as a little child, will by no means enter it…” The Lord has given us a powerful truth. There are many varying views about what the Lord means in this verse. Let us take a deeper look and search it out. First let us take a look at the preceding verses in Luke and then see where other verses in the Gospels might help us understand more.


The verses in Mark 10, seem to be about the same instance that the Lord was teaching. But what else did the Lord have to say about little children and the kingdom? The following verses are also in Luke and Mark but do not seem to be in the same context.


Interestingly, the only verses I found in Matthew pertaining to our main text are the following where all the points in the above verses are found.

As we can see from what has been written, Jesus undoubtedly addressed this teaching many times. It reminds me of how my grandfather used the truths he learned in life to help us younger ones as he also taught my siblings and cousins too. But we did not all receive from Grandfather at the same time or even necessarily in the same types of instances. Scripture can be like this. Sometimes we read about a teaching Jesus gave from one person and how they received it and then in another instance from another. Sometimes they were not even from the same occasion. But what matters is the truth that we are supposed to learn from it.

A most powerful truth about true conversion is found here: “unless you are converted and become as little children, you will by no means enter the kingdom of heaven.”

Let us consider what John recorded in that famous conversation between Jesus and Nicodemus.


Conversion is the same for anyone of any age, we must each humble ourselves with repentance and be born-again like a little child. This is the starting point for all believers in becoming like a little child and grow and mature in Christ.

How many “believe” according to whatever message they heard by a man or woman and never continue growing in Christ and His Word? Or receive a false Gospel, perhaps without any repentance, and think they are now Christians? Unless we are each converted by believing upon Jesus Christ as Lord and Savior, delivering us from the bondage of sin and the eternal punishment that we all deserve, and truly grow and mature in His Word by the revelation and guidance of the Holy Spirit, then we are in grave danger.

Jesus has given us a teaching popularly called the Parable of the Sower and the Seed. There is only one kind of seed that is sown and it is the Gospel. The four types of soil represent four different kinds of heart conditions that receive the Gospel. Three out of the four types fail. Only one type actually grows to be able to produce and this in turns means it has the ability to reproduce.

There are many in the church world that just want to see people converted. But for someone to be converted and then not discipled, puts the fresh convert in grave danger. Conversion is just the beginning. We must start as a child and grow in God’s Word and ways.

Let’s look at the first type of heart that receives the true Gospel.


The Gospel actually makes it to their hearts. But they do not have the reasoning for it to develop in them. And the devil takes the word out of their hearts.


This Gospel gets in a bit further in these, but they do not have enough root to make it and “fall away.” Maybe it is just that it happens this way, or maybe, if they grew in the Word and developed enough root, that they would keep believing and not fall away in the time of temptation.


Once again, there is failure. This time the seed makes it further, there is even some growth, but it is eventually choked out. Obviously this one has more root, but not enough to withstand the enemy. This could be a simple case that they would never grow more, but it is for certain that they do not have the Word of God strongly in operation in their hearts and lives. They fail because the strength of the weeds is greater than their strength.

Could these make it if they would grow in the Word and in the Spirit? Is it in them to do so? The Word of God is alive and life-changing. These are choked out by the weeds of the cares, riches and pleasures of life. Some of these weeds are just distractions, but some are serious pitfall sins. Like addictions and sexual relations outside of the Lord’s perimeters… knowing the truth will set someone free. But if they have no appetite or discipline for the Word of God to learn it, receive it and apply it, in time the weeds will destroy them.


It is safe to say that these mature in Christ. They even bear fruit with patience. The Gospel is received and these grow in His Word and by yielding to the direction of the Lord. Their good and noble hearts not only hear the Word, but they work to keep it. Only by growing in Christ can one make it to heaven. We all have ups and downs. The growth even comes from making it through the downs. But we must keep growing as long as we have breath!

In summation, we must be spiritually converted in the sense that we repent and receive the Gospel as a child and it must grow in us and become effective in our lives. This happens through receiving and staying submissive to the Holy Spirit and in the learning and application of God’s Word. Without it, we will be one of the first three types of failures. The fourth type if it continues, will inherit the kingdom of God. The others let the enemy steal any hope of having the crown of salvation because they were not willing to do what it takes.

“But the ones that fell on the good ground are those who, having heard the word with a noble and good heart, keep it and bear fruit with patience.”
Luke 8:15

Copyright © 2022 E. Cockrell May be used for personal study or instruction but shall not be copied and/or distributed in whole or part without permission or for financial profit.

OTHER ARTICLES PERTAINING TO SALVATION

MANY ARE CALLED, BUT FEW ARE CHOSEN
Understanding what this verse in Matthew really means & who qualifies.
ONCE SAVED, ALWAYS SAVED?
A fresh biblical approach to this age-old argument.
ONCE SAVED, ALWAYS SAVED - EXPOSING THE IMPOSSIBILITY
How do we explain these many Bible verses if "once saved-always saved" is true?
RETURN TO THE LORD
Were you once right with God and somehow slipped away?
SALVATION
If you died today, do you know where you would spend eternity?
THE WAY TO HEAVEN
When Jesus came, He not only made heaven possible for us, but He also showed us “the way” to make it to heaven.
​TRUE REDEMPTION
Jesus Christ is the only true redeemer and no one can come to God except through Him.
WORTHY
Understanding the seriousness of Matthew 10:38, "And he who does not take his cross and follow after Me is not worthy of Me."