WHO IS ABLE TO MAKE WAR WITH THE ONE WHO HAD THE DEADLY WOUND AND STILL LIVES? 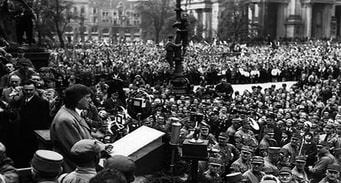 The first beast of Revelation 13, the Antichrist, has been portrayed in books and movies, that in many ways have been very fictional, no matter how Bible-based they may have claimed to be. Let’s take a serious look at the Scripture involved and the see what we can glean from these verses (and others) that relate to the Antichrist and his popularity.


For comparison, let's look at the same three sections of Scripture are listed in the Amplified Version.


Starting with the first section of Scripture.


This is mind boggling Scripture for many reasons. The evil head of an evil beast that Satan gives his power, his throne and authority to (Revelation13:2b), receives a wound (by a small sword, Revelation 13:14, Amplified Version) and is healed from it to the point that the whole world marvels and follows the beast that this entity is the head of. And not only this, but it says that they additionally worship the dragon.

This calls for a serious pause.

We know the head of the beast is the Antichrist. We know that in the physical he will seem to rise up from small beginnings (Daniel 8:9-12,11:21-24) but in the spirit, we can see from Revelation 6:2 that he enters the scene with authority and a white horse that are given to him with instructions to conquer. He will seem to many like a good guy but we know that he is an impostor and a son of the master of deception and destruction. We can also tell from Daniel 7:8,23-25, that he will be a successful strategist in war. It is most unlikely that he gets his own hands dirty on the battlefield, but he will be successful at “conquering.” And after this assassination attempt, by a small sword or machete of some kind, the whole world will marvel and be “taken in” by him. The Bible says he will be “followed by” them.

Additionally, it says the dragon who gave him his authority will be worshiped too.

When it says, “Who is like the beast? Who is able to make war with him?" - it is saying that people will be believing that the Antichrist is unstoppable.

That is, the people of the world. True Christians will be present but will not be deceived. Paul told of how the wicked will be deceived in 2 Thessalonians.


Daniel had much to say in various places about this “lawless one,” this “son of perdition” that corresponds with what is said in the New Testament and even gives additional information.


The abomination of desolation is the image of the beast.


This is certainly before the mark of the beast is imposed because after the mark is taken, anyone worships the beast and his image, will be eternally doomed according to Revelation 14:9,11.


The “lawless one” will do according to his own will. Once again, we can see the Old and New Testament verses verifying each other. This evil one is blasphemous against God. This means against Jesus. This verifies that he is antichrist because he will deny that Jesus is God an blaspheme the Lord and all that is good (Revelation 13:6). It is Christians who will be being persecuted, martyred and killed, just as it says in Matthew 24:9, Mark 13:12-13, Luke 21:16-17 Revelation 6:9-11, Revelation 12:17, Revelation 18:24 and even in more places.

This is a repeat from the section above,


Coming back to an earlier verse:


Anything coming to mind? Will he call his boss, “Satan" or “the dragon”? Maybe the devil will pose as something bizarre such as “an alien they call the dragon,” or maybe he will simply be called “the god of the beast or fortresses,” but whatever the name will be, it means they will worship the beast (Antichrist) and his god, the dragon, who is Satan.

One might wonder, how could he be “a false but believed to be, Jewish Messiah,” and fit into these verses? There is no doubt that he will start out seeming like a good guy, telling people what they want to hear, and just like all corrupt politicians, the more secure he becomes in time, the more corrupt he will become.

In the end, he will declare that he, himself, is God.


As Daniel said, no matter how people try to interfere with the future, to stop or to force it, what is determined and prophesied to happen, will still happen.

When I was young and studied these things, my bravery would go up and down like a roller coaster. Sometimes I start to get a little antsy even today. But you know what? The Lord knew all these things and shared much of it to us so that we can be informed and in some measure be prepared. And still, much of the things we will need to say and do will come from the strength and direction of the Lord that will come at the time we will need it.

Corrie Ten Boom is a hero of the Christian faith. She suffered horribly during World War 2 in a concentration camp for staying true to her faith. It took great courage for Corrie and her family to help many Jews escape the Nazis, at great personal risk. Once, before the Nazi’s caught she and her family, Corrie remembered asking her father when she was a little girl about being scared about dying and having courage. Her father told her something to this effect. “Daughter, when we go to ride the train, when do I give you the ticket?” She replied, “just before we board the train Papa.” He said, “That is right. And whenever we need it, the Lord will give us the strength, just at the right time too.”

In closing, while the wicked of the world will think that they will be unstoppable, they will most certainly be stopped.


And as Daniel prophesied to King Nebuchadnezzar:


And as Daniel saw into the future:


And the angel with Daniel declared:

ABOMINATION OF DESOLATION BIBLE VERSES﻿
A compilation of Bible verses about the abomination of desolation for thought and study.
ANTICHRIST AND FALSE PROPHET BIBLE VERSES
Bible verses about the Antichrist and false prophet compiled for personal study and thought.﻿
ANTICHRIST IS UNIQUELY REVEALED IN THREE PROPHETIC SECTIONS OF SCRIPTURE
The visions of Daniel 7, Daniel 8 and Revelation 17 reveal the Antichrist in 3 different ways and yet the same.
SATAN IS NOT THE ANTICHRIST
A short message showing that Satan and the Antichrist are 2 different entities.
THE ABOMINATION OF DESOLATION
Understanding what Bible says the abomination of desolation is and its role in the events of the last days.
THE ANTICHRIST, HIS IDENTITY AND NAME
Revelation 17 explained and more.
THE DRAGON AND THE BEASTS WITH 7 HEADS AND 10 HORNS
The dragon of Revelation 12, the beasts of Revelation 13 and 17, as well as the four beasts of Daniel chapter 7, are the same in some manners. This article shows some the devil's hierarchy in his kingdom of darkness as shown in the Old and New Testament.
THE SCARLET BEAST AND THE MYSTERY, BABYLON THE GREAT, THE MOTHER OF HARLOTS AND OF THE ABOMINATIONS OF THE EARTH
Scripture with commentary showing much about who the beast is and its relationship with Babylon, the harlot, as well as, who she really is.
THE SECOND BEAST IS THE FALSE PROPHET
In Revelation 13, we see that there is a second beast, a false prophet, of the first beast, the Antichrist.
UNDERSTANDING WHO THE ANTICHRIST IS, THE SON OF PERDITION
This shows how the Antichrist is both a false Messiah and against Jesus Christ at the same time, according to the Bible.
WILL THE JEWISH MESSIAH BE THE CHRISTIAN ANTICHRIST?
Understanding how it is possible and the reality of it.