WILL THE JEWISH MESSIAH BE THE CHRISTIAN ANTICHRIST? 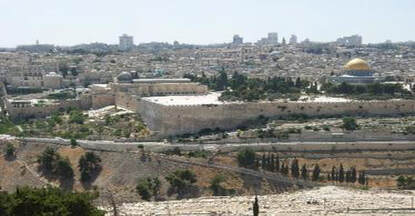 Israel, both corporately and individually, awaits their Messiah. It is a common viewpoint in Israel that if the temple is rebuilt, Messiah will come or if Messiah comes, the temple will be rebuilt. Israel awaits both wholeheartedly.

Many Jews believe that Israel was selected by God, to be His chosen people, as examples to the world. To lead the world. There are many viewpoints in believing that is will come to pass with Jews around the world returning to Israel. This to some is called Zionism. Additionally, when Messiah comes, it is believed that Israel will take her rightful place in global leadership and in the stabilization of the nations and people of the earth.

Christian's believe that Jesus of Nazareth was/is the Messiah, as Son of God and Son of Man. Christians indeed are looking for an Antichrist that will be a political and religious leader globally. Many think he will start out as a political leader, such as president or prime minister; or a religious leader such as a Pope; starting out small and rising to full global power.

To many, and including this author, we would find it almost impossible for the Jews to think a non-Jew could be believed by the Jews to be their Messiah. Jesus said many false Christs (false Messiahs) would come and that while Israel (in general) did not receive Him, they would later receive the one who will come in his own name (John 5:43). The apostle John explains how to be an antichrist means they have to deny Jesus of Nazareth as the real Messiah (1John 2:22-23,4:3, 2 John 1:7) and this evil one, will pose as the alleged real Messiah (Mark 13:21-22).

Fiction has captured the hearts of many who have not taken the words of Jesus Christ and the early apostles seriously. The “Antichrist” is a false Messiah. Could the people of the nation of Israel fall for a Catholic Pope or Gentile leader as their long awaited Messiah?

Time will tell and it may not be long until we all know for sure if this false Messiah is part Jewish, non Jewish or Gentile, but one thing is for sure, he has to convince Israel that he is their Savior.

ABOMINATION OF DESOLATION BIBLE VERSES﻿
A compilation of Bible verses about the abomination of desolation for thought and study.
ANTICHRIST AND FALSE PROPHET BIBLE VERSES
Bible verses about the Antichrist and false prophet compiled for personal study and thought.﻿
ANTICHRIST IS UNIQUELY REVEALED IN THREE PROPHETIC SECTIONS OF SCRIPTURE
The visions of Daniel 7, Daniel 8 and Revelation 17 reveal the Antichrist in 3 different ways and yet the same.
SATAN IS NOT THE ANTICHRIST
A short message showing that Satan and the Antichrist are 2 different entities.
THE ABOMINATION OF DESOLATION
Understanding what Bible says the abomination of desolation is and its role in the events of the last days.
THE ANTICHRIST, HIS IDENTITY AND NAME
Revelation 17 explained and more.
THE DRAGON AND THE BEASTS WITH 7 HEADS AND 10 HORNS
The dragon of Revelation 12, the beasts of Revelation 13 and 17, as well as the four beasts of Daniel chapter 7, are the same in some manners. This article shows some the devil's hierarchy in his kingdom of darkness as shown in the Old and New Testament.
THE SCARLET BEAST AND THE MYSTERY, BABYLON THE GREAT, THE MOTHER OF HARLOTS AND OF THE ABOMINATIONS OF THE EARTH
Scripture with commentary showing much about who the beast is and its relationship with Babylon, the harlot, as well as, who she really is.
THE SECOND BEAST IS THE FALSE PROPHET
In Revelation 13, we see that there is a second beast, a false prophet, of the first beast, the Antichrist.
UNDERSTANDING WHO THE ANTICHRIST IS, THE SON OF PERDITION
This shows how the Antichrist is both a false Messiah and against Jesus Christ at the same time, according to the Bible.
WHO IS ABLE TO MAKE WAR WITH THE ONE WHO HAD THE DEADLY WOUND AND STILL LIVES?
"And one of his heads seemed to have a deadly wound. But his death stroke was healed; and the whole earth went after the beast in amazement and admiration."
Revelation 13:3