Understanding how mankind went from being made in the image of God to a carnal and selfish nature. 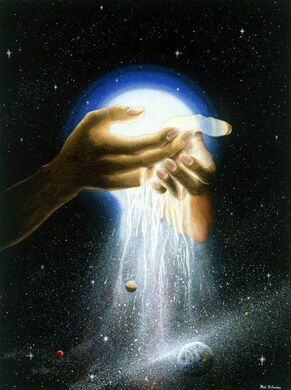 In the beginning, man was created in God’s image. There is no doubt about it, the Scripture is clear.


Both Adam and Eve were created in God’s image. This was in the original plan. Mankind was pure like God. They had no bad nature.

At the end of the day that Adam and Eve were created the Lord was pleased with His work, that all was good:


But they were equipped with the option to disobey God if they wanted.


And when they disobeyed God, they lost their godly nature. They then took on the nature of the evil one they listened to instead of God. From then on, their descendants have not been born with a godly nature, but with a sinful nature.

Everyone born of their human parents since Adam and Eve fell, has not been born in God’s image (with the exception of Jesus Christ who had an earthly mother but was conceived by the Holy Spirit and was born with a human nature but never sinned). One look around this earth, and no one in their right mind would say the way man acts and behaves in general, is still today born in God’s image. On the contrary, man is born with a fallen, carnal nature and is inherently evil.

When Jesus came, He came to make a way for us. Jesus explained to a Pharisee named Nicodemus how unless we are born-again, meaning delivered from our fallen nature and reborn in our spirits, that we cannot see the kingdom of God.


This baffled Nicodemus and he asked Jesus, how can we go back into our mother’s womb and be born-again?


Sometimes people interpret these verses as having something to do with water baptism. But Jesus was referring to being born of one’s mother the first time and then being born-again by they Holy Spirit unto salvation.The second birth, takes us from being carnally led (by the fallen nature) to being led by the new born-again nature which is pure and godly.

I do not usually quote personal words from the Lord in articles, but I think it is important to do so here.

One time I was seeking the Lord sincerely with a serious question. I was frustrated with committing sin and seeing others in the body of Christ sinning too and I cried out to the Lord about it. “How will we ever be able to make it in heaven without sinning? We are so bad Lord. We try, but we still sin. How could we all of a sudden be in heaven and sin no more? And in time, the Lord answered me. He said that once we are free from our human bodies, once they die, the carnal nature will pass with them and our born-again spirits will have no problem keeping from sinning. Oh what peace flooded my soul.

Once we choose the Lord and have the born-again experience, we have the opportunity to be Spirit-led. We must continuously choose to follow the Lord.


The “deny himself” is to deny the fallen, carnal, fleshly nature and to follow the Lord. It is to seek Him and His will with the help of being led by the Holy Spirit.

Paul wrote much about the evil human nature throughout the New Testament and also about the difference Christ makes.

Even King David wrote of his parents that he was conceived in sin. His parents were long married. He meant that all people are conceived and born in sin. Thank the Lord He made a way for us. First through Moses and the Law and then finally, the best way, through Jesus Christ of whom the old sacrificial system was a type and shadow of.

We are slaves to whomever we obey. Being a slave to sin kept us in bondage to the enemy. The quality of life for a slave depends on who the slave owner is. Now being slaves to Christ, we find total freedom! In Christ, we have the strength to overcome sin and the kingdom of darkness. In Christ, we have our needs met. In Christ, we have the fruit of the Holy Spirit, “love, joy (gladness), peace, patience (an even temper, forbearance), kindness, goodness (benevolence), faithfulness, gentleness (meekness, humility), self-control (self-restraint, continence), excerpt from Galatians 5:22-23 (Amp). And in these attributes, we find great life and are a blessing to others.

To conclude, we are are all born from human parents with a fallen nature, fleshly and carnal. But thanks to Jesus Christ, for those who surrender all to Him and call upon His name for salvation, we can be reborn in our spirits and the new us, is in the image that Adam and Eve forfeited and Jesus made possible for us.
NEXT ARTICLE
Copyright © 2019 E. Cockrell May be used for personal study or instruction but shall not be copied and/or distributed in whole or part without permission or for financial profit.

ARE PEOPLE BASICALLY GOOD OR EVIL?
​Understanding how mankind went from being made in the image of God to a carnal and selfish nature.
CONSIDERING THE PARABLE OF THE SOWER AND THE SEED
This article takes an in-depth look at the revelation of the Lord that He gave to His disciples about this parable and includes charts.
IS IT POSSIBLE THAT JUDAS REPENTED AND MADE IT TO HEAVEN?
While we are not God and only He decides who enters heaven or not, we can still consider the situation of Judas.
PAUL'S THORN IN THE FLESH
What does the Bible really say about Paul's "thorn in the flesh?" Was it a physical illness or something else?
THE INSCRIPTION AT THE CROSS
Taking a closer look at the amazing meaning of the Inscription at the Cross of Jesus at Calvary; INRI in Latin, YHWH or JHVH in Hebrew.
WHO CAN HEAR THE LORD?
Understanding the dynamics of being able to hear God or not. Those who reject Him, also reject His voice and more. An open ear and obedience to God brings wisdom and results in good choices. A closed ear to God and disobedience brings foolishness and results in bad choices.
WHY KICK AGAINST THE GOADS?
The lesson we can learn from what happened to Saul of Tarsus on Damascus road.
​
MAIN ARTICLE MENU