THE BIBLICAL MINDSET FOR LIVING IN THE LAST DAYS

In the letters to the Thessalonians, we find the best biblical posture for living in the last days. 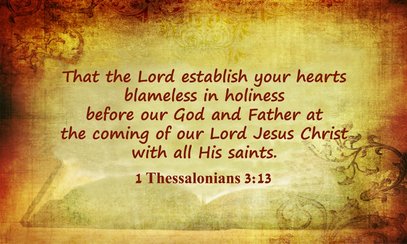 Since the Lord ascended to heaven, the followers of Christ have been looking for His return. All throughout the New Testament this mindset can be read and felt. But the New Testament writers never acted or wrote like many Christians of today. What would it sound like if Paul had said, “do not worry about this Roman Empire and staying true to the Lord, Jesus will be here any time to get us?” Or, “brothers, we know the persecution is great, but don't worry, we will be out of here at any moment.” This unbiblical attitude is a by-product of escapism theology and is very unhealthy. The proper mindset is to have, is the one to persevere, live holy lives and be faithful unto the coming of the Lord.

The times that the early church went through were horrible. If anyone had reason to hope for the Lord's return to deliver them from such times, they did. But the message was to hold fast, persevere, don't give up, etc.

In the letters to the Thessalonian church, Paul reminded them of some of what he had been teaching them in regard to the return of the Lord. There is no doubt that he taught them much more, but thanks to his letters, we can see some of it.

In first Thessalonians, he reminds them of taking comfort that those who die in Christ (fallen asleep, as he puts it), are in Christ still and reminds them about the forth coming rapture and to take comfort in it all that it means.


And Paul has much more to say, as in the next chapter as he is continuing.


What if, after the first part of the section of Scripture posted here, he had said, “but don't worry, just hang on a little longer and we will be beamed out of here?” He didn't for it would be an unhealthy mindset. Once again, the proper mindset is to have, is the one to persevere, live holy lives and be faithful unto the coming of the Lord.

Look at what he said next:


Where is the escapism mindset? It is not here. Paul continues his exhortation to stay strong, help others and to live godly lives.


And then he says this:


Paul always shared the Gospel, taught and exhorted people to live holy lives, even unto to the coming of the Lord.


Notice he said that he wants them (and it applies to us today) to be “counted worthy for suffering persecution for the kingdom of God and that when the Lord will be revealed from heaven with His mighty angels who in flaming fire will take vengeance on those who trouble believers for the kingdom's sake and who refuse the Gospel of our Lord Jesus Christ."  Paul is praying that these Christians, his own personal converts, will be counted worthy of the Lord at His coming. Not a hint of: “Oh brethren, the Lord will be here any moment, just hang in there.”

Notice he called it “that Day” as he does again.


"That Day" is the day of Christ, the rapture, verse 1 “the coming of our Lord Jesus Christ and our gathering together to Him.” And Paul wants the followers of the Lord that the Lord converted through him and that he personally discipled to be ready and make it. He warns them that “that Day” will not happen until two things first, no matter what you hear from demons or people or even fake letters supposedly from Paul or others with him.

The same is true today. No matter what some people say, from misquoting Paul or anyone else, that Day will not come until two things that he speaks of, happen first. And Paul says what these two things are: 1. the falling away must happen first and 2. then the son of perdition, the man of sin must be revealed who will oppose God and exalt himself against the Lord to the point of sitting in the temple (3. three things now, because at the time of this writing, the temple has not even been built) showing himself to be God.

It is a strong warning about what has to happen before the Day of Christ and our gathering together to Him.

He has more warning and not a hint of, “the Lord can come any minute.”


This is a much debated section of Scripture and one that many only look at certain verses to argue about who is restraining the evil one. By arguing about “who restrains” many miss the rest including “what” restrains. There are events that must happen first, before our gathering together unto the Lord at the day of the Lord. God is restraining, no matter what or who He uses to restrain. What does it mean “until he who now restrains is taken out of the way?” The pre-tribulation rapture mindset says this proves their rapture beliefs as it is commonly claimed that "the Holy Spirit" is the "restrainer" and the Holy Spirit is removed from the earth at the rapture with the saints and then the Antichrist can rise to power. And they further say that people will be saved after the rapture (to explain why Christians are still here in the first 3 ½ years), even though the restrainer, the Holy Spirit, would be removed from earth according to that doctrine. What erroneous doctrine. As stated previously, no one can be saved without the conviction of sin and the revelation of Jesus Christ, which can only be revealed by God who works with man through Himself, the Holy Spirit. The Bible does not say the restrainer is the Holy Spirit or even that He is removed. The Bible says “until he is taken out of the way.” We know from Revelation 13:5 and Daniel 7:25 the evil one is given authority over the whole earth including Christians for 3 ½ years. In the Greek language that Paul wrote this letter in, he used the phrase “taken out of the way”, which was commonly used “to allow something by moving something else.” It is bad speculation to take this phrase and say it means the Holy Spirit is removed from the earth. It was the way they spoke at the time and simply means, that whatever God uses to hold the enemy back, is moved or removed from doing so, so that the enemy can then proceed forward.

To get caught up in arguing about who is restraining is to miss the point which is that there is an appointed time for the evil one to be revealed. This evil one will affect the entire earth, both Christians and non Christians.


This evil one, this son of perdition will rise to power in the midst of a great apostasy, a rebellion against the Lord. Paul has firmly said that we will not be gathered up to the Lord until these things happen and not to be deceived by anyone who would say otherwise.

The Lord is coming for His church and He will not be eloping with His bride. All creation will see Him when He comes. He will gather His own unto Himself. Those who love and know their God and His Word, will not fail in this. The bride does make herself ready (Revelation 19:7) though she will go through great persecution first. In Matthew 24:1-51, Mark 13:1-37, Luke 21:5-36, Revelation 6:9-11,13:6-10,6:15 and many other places in the Bible.

The rejection of the Gospel and the persecution of God and His kingdom is a dangerous thing. And those who reject the Gospel and join in with the devil and his Antichrist will pay a terrible price and it will be the result of their own doing.

Christians who are privileged to live during the last days will certainly face tremendous times. While there will be great tribulation there will also be great opportunity and reward for those who stand firm and endure to the end. Lets share the Gospel with love, action and words while it is still allowed. Hold fast to our Lord and stay ready, living holy lives, separate from this world.

As Paul has said,

And may the Lord make you increase and abound in love to one another and to all, just as we do to you, so that He may establish your hearts blameless in holiness before our God and Father at the coming of our Lord Jesus Christ with all His saints.
1 Thessalonians 3:12-13

WHAT IS THE RAPTURE?
How we know there will be a rapture and more.
IS THE WORD "RAPTURE" IN THE BIBLE?
Understanding  "harpázō" - the word from which we get the term "rapture" that we use today.
RAPTURE VIEWS﻿﻿
Article showing various end time and rapture views including millennial views with definitions to help in having a deeper understanding.
THE MYSTERY OF THE 70 WEEKS OF YEARS
From this prophecy in Daniel, "the last week of years" are determined, which are commonly known as "the 7 years of tribulation" and this article includes a chart to help in understanding.
THE TRIBULATION AND THE WRATH OF GOD
Understanding that mid tribulation rapture is pre-God's wrath. Taking a closer look at what "wrath and tribulation" really mean and what really happens during the last 7 years of this age.
﻿﻿"TRIBULATION AND WRATH" - BIBLICAL DEFINITIONS AND USAGE
A word study, taking a deeper look at original context.