UNDERSTANDING WHO THE ANTICHRIST IS, THE SON OF PERDITION 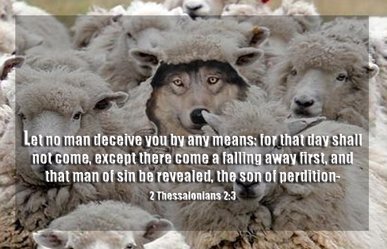 The “son of perdition” of 2 Thessalonians 2:3 and “the Antichrist” of 1 John 2:18 are one and the same. Let's establish some basic premises in regard to this particular evil one. Let us seriously consider these two sections of Scripture by apostles Paul & John.


Jesus spoke of him also in various places.


The Lord has warned us not to be deceived by anyone on this earth that anyone would say is “the Messiah.”

The Lord said that when He, the real and only Christ, returns; the whole earth will go dark, the sun, the moon the stars and the heavens and earth shake and people will see Him in His power and glory, as He illuminates the atmosphere and gathers His saints up to Him.

In order to understand the Bible as God wants us to, we need divine revelation. Jesus spoke in a way that only those with ears to hear would be able to realize and receive the truth. As we study the Bible, we need to listen for the Holy Spirit. He will make things stand out for us to pray over and meditate on because there is something there to be revealed. Notice in the previous verses in Mark, “Look, here is the Christ,” it is important to note something. Jesus said, “the Christ.” That means, “the Messiah” as Christ means Messiah. So what He was really saying is, “Look, here is the Messiah, here is the Christ.”

Notice in the following verses, Jesus said to watch out for impostors of Him.


These are two different things He is warning of. An “impostor of Jesus,” will say as Jesus said they would “I am Jesus” - A person calling themselves or being called “the Messiah,” can be different. Jesus is the Messiah, the Christ, and some try to say they are Him. However, there is another part of the Lord's warning that is a bit harder to see. Some will come saying, Jesus was not the Messiah but they are.

God sent Jesus, the Christ (the Messiah) to the Jews to be their Savior. But they were looking for “a deliverer type of Messiah” rejected Him (many Jews followed Jesus and are the founders of Christianity, but the majority rejected Him).

To this day, the Jews are looking for “the Christ” - the Messiah. They denounce that Jesus of Nazareth is the Christ (Messiah) and are looking for a political leader type Messiah who will help them in every way. Some Jews today believe that they must have the temple built again so “the Messiah” can come and others believe “the Messiah” will come and then help them build the temple. The “son of perdition” must fit the role of “Messiah” in regard to this temple situation.

There is a common mistake when trying to understand “who this son of perdition is.” People want to look through “Western eyes” or “wherever they live eyes” instead with “biblical eyes.” God is working through the Jews. Jesus was not referencing a Chinese Messiah or American Messiah. This false Messiah has to fit the description of a Jewish Messiah.

There are many who want to believe he will be a Pope. Have you ever heard of a Jewish Pope? This is not about a “Catholic” Messiah, or an "Islamic" Messiah. Buddhist, Muslims, Krishna’s and many other religions are all looking for “messiahs.” But unless this “false Messiah” fits the religious Jews expectations, then it is not the one who Jesus, Paul and John warned us about.

Okay, how can one be “antichrist” and “false Messiah”? Jesus said, beware of one saying, look here is the Christ (Messiah). And John used the term “antichrist.” So how can the two mix? What exactly does “antichrist” mean?

The apostle John explained what it means to be “antichrist.” To be "antichrist," means to deny Jesus of Nazareth came as the Son of God and as the Messiah.


In simpler words, to deny Jesus is the Christ, the Messiah, is antichrist and also denies the Father and Son relationship of God and Jesus.


The Lord's name to us is Jesus Christ... but “Christ” not His last name. Christ is His title. The deceivers who do not confess that Jesus, the Christ (Messiah), came as the Son of God are antichrist.

So, this son of perdition, this Antichrist, will not claim to be Jesus of Nazareth who returned somehow but will declare that Jesus was not the Christ (Messiah), Son of God who came in the flesh. He will be to the Jews, their long awaited Messiah. He will be a global leader that many will fall for but the deception with the Jews has to be inclusive or he will not be the one spoken of by the Bible that will fulfill these prophecies.

Why will people fall for him? The Apostasy, great falling away, that comes first, will be a time of deflecting from the truth that will happen as the world grows spiritually darker. In rejecting the truth of God and choosing wrong spiritually, the dulled reasoning of such people, will make easy prey for this son of perdition.

Realize this. The section of verse in 2 Thessalonians 2:3-4 says, “the man of sin is revealed, the son of perdition, who opposes and exalts himself above all that is called God or that is worshiped, so that he sits as God in the temple of God, showing himself that he is God.” Many are looking for the Antichrist to appear on the scene as a man “who opposes and exalts himself quickly." When we put the verses together we get more of an understanding of the evil one.

The description in 2 Thessalonians 2, relates to the “summation of the man” and how he will be “in the end.” When he first comes on the scene, he will not expose his true self. In his heart, he will be both anti-Christian and anti-Jew. In all likelihood, he will not show his true colors until after he is comfortably seated in power. Otherwise, the Jews would not even consider him for a Messiah.

Evil leaders do not usually start out showing themselves evil. This “son of perdition” will come out “riding a white horse and wearing a white suit and hat...” (allegorically). Evil leaders are experts at “bait and switch.” They offer carrots or candies and once they get people taking the bait, then eventually the bait is served with a hook or worse in it. Consider that one of the oldest “political tricks” in the book is to trade favors for votes. People vote for the ones that help them. This man will deceive many by getting them to think that they will prosper by him. Once in power, then the ugly will start to unfold.

So, who will this global leader be who also will also be a false Messiah to the Jews? Will he be human and merely possessed? Will he be 100% demon and appear as a man? What country will he come from? Is he on the world scene today? We all have many questions. Some answerable and some we just cannot know yet. One thing is for sure, the Bible does have a lot to say for those who want to know and are willing to study.​

ABOMINATION OF DESOLATION BIBLE VERSES﻿
A compilation of Bible verses about the abomination of desolation for thought and study.
ANTICHRIST AND FALSE PROPHET BIBLE VERSES
Bible verses about the Antichrist and false prophet compiled for personal study and thought.﻿
ANTICHRIST IS UNIQUELY REVEALED IN THREE PROPHETIC SECTIONS OF SCRIPTURE
The visions of Daniel 7, Daniel 8 and Revelation 17 reveal the Antichrist in 3 different ways and yet the same.
SATAN IS NOT THE ANTICHRIST
A short message showing that Satan and the Antichrist are 2 different entities.
THE ABOMINATION OF DESOLATION
Understanding what Bible says the abomination of desolation is and its role in the events of the last days.
THE ANTICHRIST, HIS IDENTITY AND NAME
Revelation 17 explained and more.
THE DRAGON AND THE BEASTS WITH 7 HEADS AND 10 HORNS
The dragon of Revelation 12, the beasts of Revelation 13 and 17, as well as the four beasts of Daniel chapter 7, are the same in some manners. This article shows some the devil's hierarchy in his kingdom of darkness as shown in the Old and New Testament.
THE SCARLET BEAST AND THE MYSTERY, BABYLON THE GREAT, THE MOTHER OF HARLOTS AND OF THE ABOMINATIONS OF THE EARTH
Scripture with commentary showing much about who the beast is and its relationship with Babylon, the harlot, as well as, who she really is.
THE SECOND BEAST IS THE FALSE PROPHET
In Revelation 13, we see that there is a second beast, a false prophet, of the first beast, the Antichrist.
WHO IS ABLE TO MAKE WAR WITH THE ONE WHO HAD THE DEADLY WOUND AND STILL LIVES?
"And one of his heads seemed to have a deadly wound. But his death stroke was healed; and the whole earth went after the beast in amazement and admiration."
Revelation 13:3
WILL THE JEWISH MESSIAH BE THE CHRISTIAN ANTICHRIST?
Understanding how it is possible and the reality of it.