Considering why God might have chosen "pearls" for the gates of the heavenly New Jerusalem. 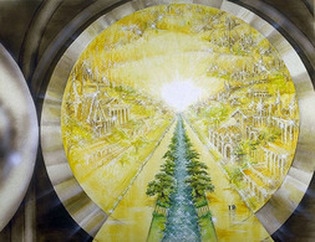 So often we hear jokes or remarks about heaven and how St Peter is there at the Pearly gates.. etc.  Somehow in the course of life, the reality of the gates being made of single pearls gets overlooked. These gates are magnificent and specially chosen by God for the gates to His city.

Why did the Lord choose "pearls" for the gates to the Holy City in heaven? There must be some special reasoning on it.

Someday the new home, for all Christians will be the Holy City, the heavenly New Jerusalem! No evil can enter in through these gates. These 12 gates that are named after the 12 tribes of Israel, through which God birthed His Chosen people. The 12 foundation stones, that support the huge walls, are named after the chosen Apostles, the first messengers of the Gospel through which the Lord has built His Church.


The wall to the Holy City is huge as it is proportional to the size of the city. Each of the colossal gates are made from a single colossal pearl!


Let's consider pearls as God specifically chose them for the magnificent job of the becoming the gates.

We all know the how pearls come into being. A mollusk, such as an oyster lives like a filter, with intake and out-take. But one day, something gets stuck inside during the process; such as a grain of sand. The oyster cannot expel this intrusion, so he does the best he can. In its frustration, the oyster covers that sand with a solution called nacre. Little by little, the irritation of sand becomes less and less to him and it grows and grows into an incredible pearl.

What does the pearl symbolize in the Bible?

Jesus taught about the Kingdom of heaven in Matthew 13:45-46 "Again, the kingdom of heaven is like a merchant seeking beautiful pearls, who, when he had found one pearl of great price, went and sold all that he had and bought it."

How the merchant valued this pearl.

First thought: Jesus Christ is the pearl. And the man, having tried everything else, comes to realize that there is not satisfaction or real life outside of Christ. And like all true disciples, he gives up all and follows after Jesus.


Second thought: We are the pearl. Jesus Christ, gave His all for us. He laid down his life willingly, out of total love for each and everyone of us.


Third thought: Proverbs 11:30 says, “And he who wins souls is wise.” The fine pearls are souls. Winning souls to the Kingdom is like seeking after fine and precious pearls.

How amazing that we are God's pearls of great price, each of us entering one by one, each of us redeemed by Jesus Christ, bought with His very own blood. God's blood, not just man's blood and we are adopted into son-ship just as if we were born into it. We who were originally made in His image and as mankind, and fell away. And now, in the process of restoration, are born again into the Light.

While we live daily at war with the fallen nature- someday we will each leave this fleshly, fallen nature behind and enter right through those one of those Pearl Gates as God's precious treasure, that Jesus Christ gave His all for.

NEXT ARTICLE
OTHER "HEAVEN" & "HELL" ARTICLES

JUDGMENT DAY
Will there really be a “Judgment Day” where "everyone" will stand before God and give an account of their lives? Is the Great White Throne of Judgment for the Lost and Believers alike?
HEAVEN - BIBLE VERSES
Bible verses about what heaven is like, the throne of God, the redeemed and so much more.
HEAVENLY REWARDS
Are all Christians & their good deeds rewarded the same?
ARE ALL SINS & THEIR PUNISHMENT EQUAL?
The wages of sin is death. But all sins are equal? Eternal consideration on the matter of sin.
HELL - BIBLE VERSES
Excerpts from Scripture about hell.
HELL IS REAL AND LITERALLY BURNS AS SHOWN IN THE BIBLE
Hell is a real place of punishment that literally burns as shown in the Bible. There are many people today who believe otherwise. See what the Bible really says.


Copyright 2015 E. Cockrell May be used for personal study or instruction but shall not be copied and/or distributed in whole or part without permission or for financial profit.